When looking for new bulbs such as LED bulbs, everyone wants to know “What’s the brightest bulb?” Well to answer that question and to truly get a better picture of what “brightness” is, we need to get scientific and define a few terms. But not to worry! I’m going to make this article as simple as possible to wrap your head around. So stick with me for a moment and you’ll be a pro when it comes to figuring out and understand true brightness.

The two main words to define as we talk about headlight brightness are lumen and lux.

Lumen: A unit of measurement for luminous flux which is a measure of the total quantity of visible light emitted by a source.

Lux: A unit of measurement for illuminance which is a measure of how much luminous flux is spread out over a given area.

Lumens are how bright the light source is

So let’s think about these definitions as we see how lumen and lux amounts are measured and how that process applies to bulbs. 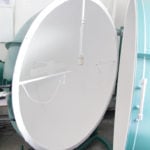 Luminous flux, which I’ll just refer to as lumen, is measured inside of a device called an integrating sphere. A bulb is placed inside the sphere and the light given off by the bulb is scattered by the interior of the integrating sphere and evenly distributed over all angles. The total lumen amount of a light source can be measured accurately since light can be captured from all angles from inside the sphere. While this method of measuring the brightness of a bulb works well for lighting applications where 360 degrees of light is needed, (such as a table lamp) the lumen amount is only half of the story while testing the brightness of headlight bulbs. This is why illuminance and lux are so important.

Lux is measured by installing the bulb inside a housing and testing to see how well the lumen amounts are projected or reflected out from the housing. In this instance, we measured the beam pattern created from the housing and bulb combination on a wall 25 feet away. From this distance and this position, we are able to see the lumen amounts from the bulb that are truly being utilized and turned into a usable beam pattern by the headlight housing. When measuring lux this way, we are able to take into account multiple factors playing into the brightness of the bulb and find a clearer picture of true, usable light. The lumen amount from the bulb, the relationship between bulb and housing, the resulting beam pattern, and distance are all factors when calculating lux this way.

A digital light meter used to measure lux. In this application, lux is being measured in a beam pattern created by a LED bulb inside a headlight housing.

So you’re probably thinking, “Well then, doesn’t that mean a bulb with the highest lumen amount will be the brightest?” Maybe. Remember, lumen amounts are only one piece of the puzzle when determining usable light brightness.

“A given amount of light will illuminate a surface more dimly if it is spread over a larger area, so illuminance (lux) is inversely proportional to an area when the luminous flux (lumens) is held constant.”

It is possible for a bulb with high lumen amounts to focus poorly once placed inside a headlight housing due to poor engineering and design. The result would be an unfocused beam pattern with light reflected or projected poorly. In that case, a poorly focused beam pattern from a bulb with an initially high lumen amount would have low lux measurements because the light is spread out or unfocused. A light like this would be “bright” on paper, but not actually usable in a real-world scenario.